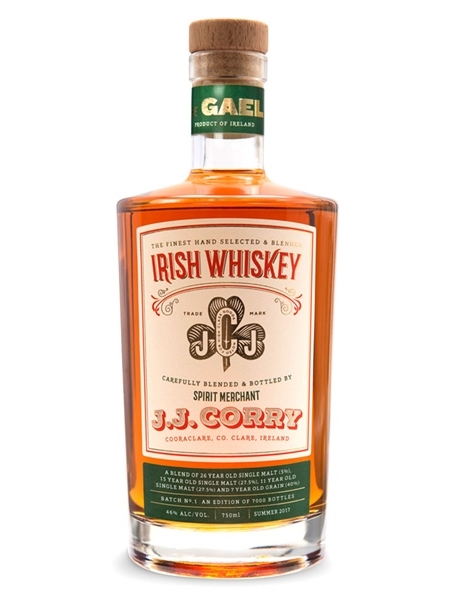 JJ Corry was a tea and spirit merchant based in the port town of Kilrush in Co. Clare in the late 19th century. Along with being a trader, he was also an innovator and he invented a bicycle called The Gael. In 2015, following a career in the drinks industry with Diageo, Pernod Ricard and Moet Hennessey, Louise McGuane set up the Chapel Gate Whiskey Company on her family farm in the Kilrush's neighbouring village of Cooraclare.

A dunnage style, bonded warehouse now sits on the farm as Louise brings back the near-lost art of whiskey bonding. While the Chapel Gate Whiskey Company is yet to establish its own distillery, Louise has acquired new make Irish spirit and in December 2015 had it moved to her rackhouse on Ireland's west coast to start it's maturation process.

While that spirit is quietly aging on the Wild Atlantic Way Louise has put together Chapel Gate's first independent bottling release called The Gael. It's a malt/grain blend of mature Irish whiskey. 40% of the contents is 7yo single grain. The malt content is made up from 5% 26 year old single malt from an ex-sherry butt; 27.5% 11 year old single malt; 27.5% 15 year old single malt. This is a release of 7000 bottles and is released at 46% ABV.